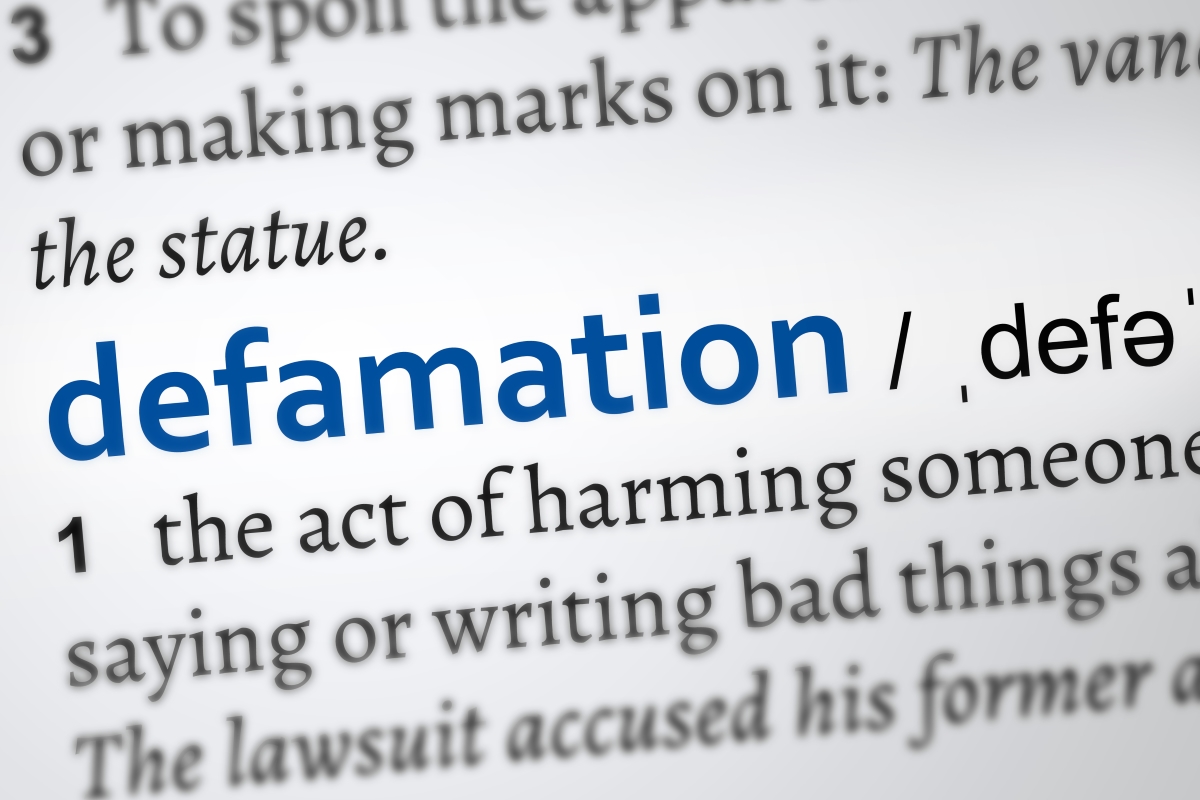 An Overview of Defamation Under US Law

Defamation is the act of making a statement of false information regarding another. The statement can be written or spoken and it also has to harm a person’s reputation. If the statement is written, it is called libel, if spoken, slander.

Another defense against a defamation prosecution is privilege. Privilege is a special legal immunity granted to a person. There are two types of privilege. Absolute privilege is an immunity from lawsuit, usually a lawsuit for defamation, even if the action is wrong, malicious, or done with an improper motive. Conditional privilege is a privilege that immunizes a defendant from suit only when the privilege is properly exercised in the performance of a legal or moral duty. “Where the defendant has an absolute privilege, the plaintiff will not have a viable cause of action against him, even if he can prove that the defendant acted with malice, that the defendant’s statement was false, or that the statement was widely published.”[1] Statements made in a good faith and reasonable belief that they were true are also possible defenses against defamation claims.

The courts have established a doctrine called a limited purpose public figure, which is, a person who voluntarily participates in a discussion about a public controversy, and has access to media to get his/her own view across. “These are individuals who "have thrust themselves to the forefront of particular controversies in order to influence the resolution of the issues involved." Gertz v. Robert Welch Inc., 418 U.S. 323 (U.S. 1974).

Limited purpose public figure can also be characterized as a person who distinguished himself in a particular field, making him a public figure only regarding those activities.

Depending on the circumstances, the plaintiff will either need to prove that the defendant acted negligently, if the plaintiff is a private figure, or with actual malice, if the plaintiff is a public figure or official. Celebrities, politicians, high-ranking or powerful government officials, and others with power in society are generally considered public figures/officials and are required to prove actual malice. The courts have defined actual malice as publishing a statement either knowing that it is false or acting with reckless disregard for its falsity or truth.

In order to prove defamation, the Court set a four-part test for determining whether someone is a limited purpose public figure, a defendant must show the plaintiff has:

(1) successfully invited public attention to his views in an effort to influence others prior to the incident that is the subject of litigation;

(2) voluntarily injected himself into a public controversy related to the subject of the litigation;

(3) assumed a position of prominence in the public controversy; and

Incorrect harmful statements published about a public figure or a limited purpose public figure cannot be the basis of a lawsuit for defamation unless there is proof that the writer of publisher intentionally defamed the person with malice. This rule was first delineated in New York Times Co. v. Sullivan, 376 U.S. 254, 279–80, 84 S.Ct. 710, 725–26, 11 L.Ed.2d 686 (1964), the Supreme Court held that a state can grant damages to a “public official” for defamatory statements after showing that the statements were published with “actual malice, that is, with knowledge that it was false or with reckless disregard of whether it was false or not.” This standard is extended to “public figures” in Curtis Publishing Co. v. Butts, 388 U.S. 130 (1967). In that case, the defamatory action was based on libel, which is written defamation. The Court indicated that parties who are not public figures for all purposes could still be public figures with respect to a particular controversy.

In Gertz v. Robert Welch, Inc., 418 U.S. 323, 342, 94 S.Ct 2997, 3008, 41 L.Ed.2d 789 (1974), the Supreme Court declined to extend the New York Times standard to defamation actions brought by private individuals. The Court's decision makes a difference between private and public figures. The Court noted that private figures are more vulnerable to be injured from defamation. Public figures have greater access to the media and thus are in a better position to contradict a lie or correct an error. Besides, public figures generally “have voluntarily exposed themselves to increased risk of injury from defamatory falsehood concerning them.”

United States Supreme Court defined the meaning of “public figure” for the purposes of the first and fourteenth amendments: “For the most part those who attain this status have assumed roles of especial prominence in the affairs of society. Some occupy positions of such persuasive power and influence that they are deemed public figures for all purposes. More commonly, those classed as public figures have thrust themselves to the forefront of particular controversies in order to influence the resolution of the issues involved. In either event, they invite attention and comment. ”Gertz v. Robert Welch, Inc., supra, 418 U.S. at 345, 94 S.Ct. at 3009

In another case; Gambardella, the plaintiff filed a defamation claim against the defendants alleging that they had communicated false accusations of theft to others in connection with their termination of her employment. The court said; “We define actual malice as the publication of a false statement with knowledge of its falsity or reckless disregard for its truth, and malice in fact as the publication of a false statement with bad faith or improper motive. Additionally, to recover punitive damages, a plaintiff must prove actual malice, regardless of whether the plaintiff is a public figure.” Gambardella v. Apple Health Care, Inc., 291 Conn. 620, 628 (2009).

In the Contemporary Mission case, The United States Court of Appeals held that the priests were limited purpose public figures for the purpose of the statements in the article concerning the religious and business controversies and that they had failed to show sufficient facts to establish actual malice by New York Times. The Court also divided the statements into two broad categories:

“(1) those dealing with the religious controversy surrounding the priests' ordinations and their status as priests; and

The judge concluded that appellants may properly be characterized as limited purpose public figures with respect to both the religious and business controversies.” Contemporary Mission, Inc. v. New York Times Co., 665 F.Supp. 248, 262 (S.D.N.Y.1987).

In summary, if a person has established position for himself giving him the opportunity to address and influence others with his own views and ideas, he is most likely to be held as a public figure or a limited purpose public figure by the US Courts. And the most important consequence of this is, unlike a private citizen, a public figure has the burden to show sufficient facts of actual malice to establish a plausible defamation claim against the publisher of the defamatory statements.